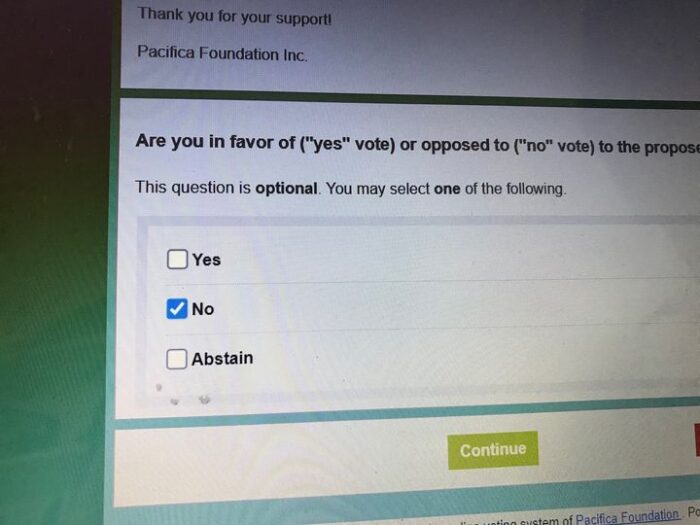 A true story inside Pacifica flagship station KPFA: “Noelle, we will not play that track on our airwaves. It sounds like someone is reading the communist manifesto up on a soap box.” Aileen Alfandary (KPFA News director during a weekly staff meeting. Noelle Hanrahan: “Aileen, this is Peter Coyote, reading a copy of the Bill of Rights”

Please turn in your ballot. As a former staff member at KPFA, a local KPFA advisory board member, a union steward at CWA for the shop. GOOD LORD.
We need to preserve this space for transformative programming. Not just the programming that the staff feel is safe.
At KPFA and Pacifica wide, there are a group of “long term” insider staff who want to do “safe” programming. It is just how it has been for quite some time. They censor themselves. And when you go outside of their comfort zone they try to censor you.
I will never forget National Pacifica Director of Programming Pat Scott telling me “We will never play Mumia, you do not even have to put the tape in the tape player.” This was in 1994. I went to every local station, found the courageous programmers and enlisted courageous folks at Democracy Now! and Mumia got on the air.

KPFA would not hire a development director for a decade, trying to just gut the resources of the station, to “tank” so that they could sell the other stations and have their little island in Berkeley. Well they also floated a bunch of other “sell the stations to break up the network” ideas. But they literally sat on a 150K check for six months, it was left in a drawer in the station manager’s office, because they did not want the network to be functional.

Ok- then there are the jobs on the air for life. How about, yes job security but you teach, do admin and train the next generation, but that by policy we make sure that the air is not dominated by only the voices that we have heard for decades, and whose main calling card is that they 1) have been able to survive the intense toxicity and are 2) for the most part unemployable elsewhere.

Yes I am angry. For instance, my successful sexual harassment claim that resulted in a judgment against KPFA. They control the union. Bury and hide the vote for CWA reps. How many years was Mark Mericle rep to the union local, and when was there ever open voting for that position that he held for god only knows how long. I was banned from the station in the wake of filing my sexual harassment suit against Dennis Perpstein. It took me 7 years to win reinstatement and I had to force the union to go to arbitration. Good lord. There were 12 women before me and many after- nothing changed.
So that is the rot that is keeping the network from growing — the Wellstone Club and their fledgling Brian Edwards Tiekert….. look, folks who do great radio can get other jobs – can ANY of them? Do any of them? Some of them supplement their income but honestly – this is not a job for life, unless you are willing to also do administrative work, because you suck up all the air, sun, light and water and prevent anything else from growing.

Vote No. For a new day at Pacifica there has to be the space for new voices.