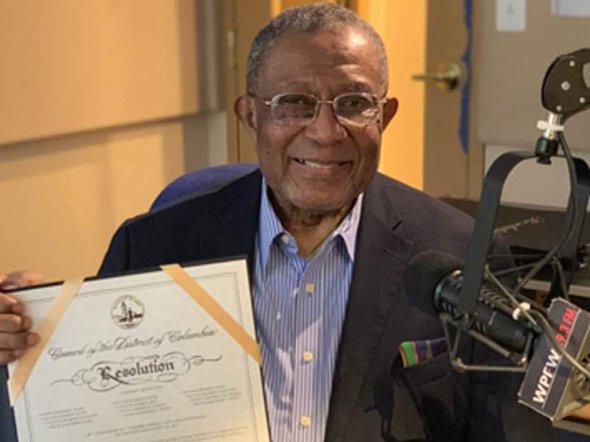 Askia Muhammad, news director and programmer at WPFW died at his home in DC on Feb. 17,  at age 76.

Muhammad was a mainstay of WPFW for 40+ years. He also wrote a column that appeared in Black-owned newspapers like the Washington Informer. He was the senior correspondent at The Final Call, the Nation of Islam newspaper, and a White House correspondent for almost three decades.

WPFW issued a statement, saying that: “Words are inadequate at this moment. So, we just hold onto the vibration of love, truth, perseverance, hope, and joy that Askia always exuded. Let us reflect on the beautiful legacy that Askia left us and how we can collectively carry forth the impeccable vibration of his spirit.”

His weekly show on WPFW, “Yardbird Sweets,” embodied the station’s motto “Jazz and Justice”, including jazz and frequent appearances by Min. Louis Farrakhan of the NOI. Muhammad told the Final Call that his show’s name came from Charlie Parker’s song, “Yardbird Suite,” adding, “I call my show ‘Sweets’ as in candy because I didn’t want to be confused with Charlie Parker’s Yardbird Suite.”

His voice was heard nationally most recently in the promotional announcement of Pacifica’s Black History Month special day-long program, “Black Is.”

The DC City Council declared a day to honor Askia in 2009. “Whereas,” the resolution says in part, “during Askia Muhammad’s career, he has examined a wide range of issues, particularly the ongoing movement for statehood, self-determination, and full democratic rights on behalf of over 600,000 residents of the District of Columbia, the capital of the world’s leading democracy; and:

“Whereas, Askia Muhammad today serves as WPFW’s News Director, writes a weekly column for The Washington Informer, and contributes to numerous other media outlets,” (including The Final Call newspaper; Howard University’s WHUT-TV 32, public radio’s ‘Soundprint’ series, as well as National Public Radio), “for which he has been recognized by the National Association of Black Journalists;” Therefore, the resolution concluded: “The Council of the District of Columbia applauds Askia Muhammad, WPFW News Director and host of the station’s Tuesday Morning Jazz program, for 30 years of uninterrupted service to radio listeners in the District of Columbia,” the resolution reads.