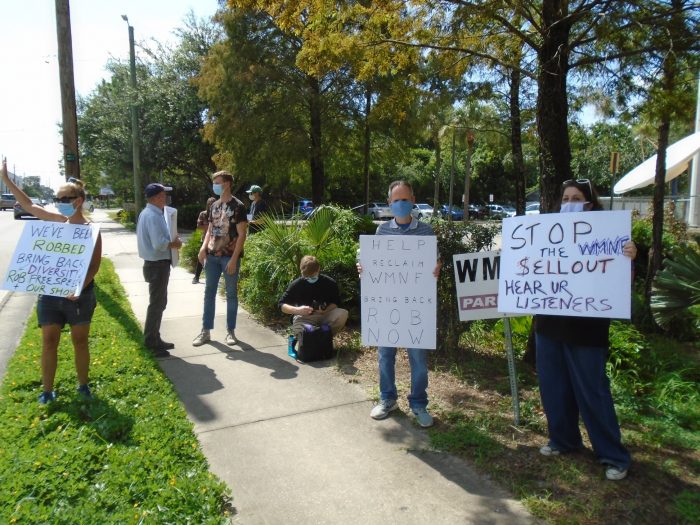 WMNF is in the greatest crisis it has seen since its inception. It is a self-inflicted economic down-turn but also a great membership loss, and most importantly, it is a crisis of legitimacy. Since the recent changes, attributed to Rick, the just departed General Manager, the Station has turned off and turned away a large and devoted part of its membership and supporters and thousands of its regular listeners and financial supporters.

And, while Rick, as a front for the ill-conceived changes had many people in doubt, today, months later, we see that none of the decisions that were said to have been made by him, have been rolled back, vindicating the position of some of us who see that they were part of the plan, by Randy Wynn, the then-Program Director of WMNF, concocted in 2014 and which is now in a higher stage of implementation.

Right-wing forces at WMNF were allowed to take hold without being confronted and sometimes with support even when they were making their nefarious plans on paper, on emails, and openly, at least to Station insiders. A total lack of political discussion, an interest in becoming “legitimate” and respected, and a great fear of the economic situation, lent themselves to a very quickly and haphazardly carried-out coup. For that reason, many people who never questioned WMNF’s management’s decisions, now started to publicly express concern and contradiction with them.

The present crisis has its roots over 10 years ago when in 2010, an email written by the previous Program Director attacked Sunday programming, which was a stronghold of Black shows, since practically none were heard during daytime weekday programming. He called Sunday shows “special interest” and said that many “core audience” members tuned out and forgot to tune back in on Mondays.

That was followed in 2014 by an email answered below and saying:

The following excerpt of an email sent by Randy on 8/29/2014, says what should be of concern to all of us:

“So while a Triple A format is beckoning I feel plenty of barriers at WMNF. Having 5 different volunteer programmers on a strip. Commitment remains to news and public affairs. The ideals of diversity and peace and social justice.”

In the quote above, Randy thinks we have too many volunteer programmers; he has said at meetings that he prefers paid programmers. He feels that listener support and commitment to news and public affairs is a barrier to growth and progress for the Station, and he as well sees the ideals of diversity and peace and social justice to be in the way of the direction he would like to take with WMNF.

I wholeheartedly and respectfully disagree and I am sure you do too. I think we need both growth and our continued commitment to our Mission which is centered on diversity and peace and social justice. And, News and Public Affairs, including the political programs have educated us and thousands of people in our listening area; a service we alone provide. If we follow Randy’s stated plan, we will cease to be a community station.

Needless to say there was no response and in a few short months they had suspended the author, Alvaro Montealegre, for a year over very fluid assertions of infractions that changed each of the three times that he was given an audience to defend himself and to discuss their claims.

The claim was that he had “abused the email lists.” The issue was that Alvaro, as Board Operator Trainer, found that Black prospects who had applied to train, were not being called by the Volunteer Coordinator. Because it was a recurring problem and because there were racial undertones on the part of the Volunteer Coordinator, Alvaro sent out an email to everyone@wmnf.org letting them know of the problem. That caused Alvaro to be called in for a disciplinary meeting and the subsequent punishment of a one-year suspension.

Today they make it seem like it was all a consortium of bad changes carried out by Rick, the recently departed General Manager, but all of the people who advocated, along with Randy, the previous program director, for the 2014 proposal, have united and consolidated an impenetrable majority in the Board of Directors and the Volunteer Committee.

Some people close to us feel that the formation of this solid core of conservative radicals is a cause for pessimism; it really should not be. As they, out of paranoia, form a tight group, “circling the wagons” and seeing everyone as enemies. and rejecting even their own supporters whom they consider not radical enough, great room for action is left open to us and many of those shunted individuals come closer to us. It is up to us to organize ourselves appropriately to reach out to as many people as possible and taking all of the peaceful and legal actions possible to confront and correct the misguided corporate path they have taken.