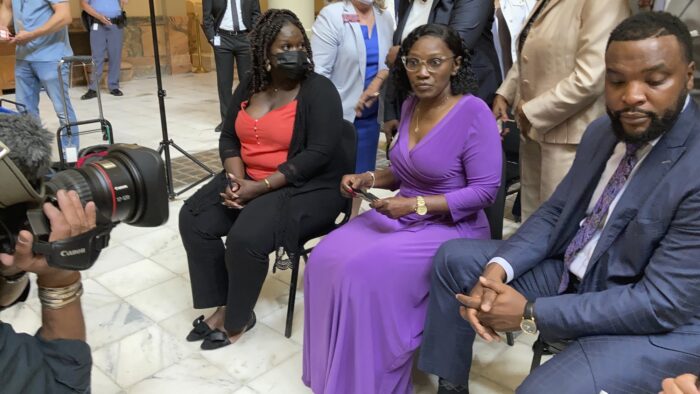 We the undersigned submit this action-letter to you and for you to sign onto it and disseminate it further, to make this a living document to educate, agitate and organize against white supremacy. We its initial signatories are committed to recognizing white supremacy and interrogating it in whatever manner it manifests, and most decidedly when it happens within our own sphere, and believe you are too. We seek to pull out, root and branch the weeds of racism within our midst and believe it is obligatory to speak out to move us forward if we are committed to social change.

As such, we shine a light on a cruel, racist email authored by Stephen (“Steve”) Brown on November 24, 2021, and posted widely to his large list of listeners and staff of the Pacifica Radio Network and beyond:

In Brown’s email, headed:
“Reaction of Arbery’s mother to guilty verdict is perplexing”
Brown states:
‘When Arbery’s mother heard the verdict of guilty announced for the three men who had murdered her son, she said, “I never thought this day would come—but God is good.”
‘Really? Did she forget that the same God who arranged for that guilty verdict also arranged for her son to be murdered? How foolish can people be who suffer the most cruel and abject horrors, but on mitigation of even the slightest part thereof praise God as if it were not, He who had beset them with so much misery in the first place.’

Steve Brown is a person of considerable means, who prospered by sending
unsolicited mail, “junk mail” in bulk for commercial enterprises to the public, and which technique he now uses to facilitate the propagation of his political diatribes. Moreover, Brown’s wealth and advertising proclivities have oftentimes facilitated his positioning himself to influence vital, legacy news outlets, Pacifica radio and Covert Action Magazine, both geared to humanism. These media organs’ core values are anathema to the mordant
racism directed by Brown at Wanda Cooper-Jones, the mother of lynching
victim Ahmaud Arbery; as are ours.

In the wake of the conviction of the three murderers of Ahmaud Arbery in
Georgia, which came on the heels of the acquittal of the killer of two antiracist allies at racial justice protests in Wisconsin, most progressive and antiracist commentators focused on the importance of a modicum of justice being achieved in the case. They pointed to the impact of the family’s demands, echoed by the larger community, and the leaking of a cellphone
video of the murder, as central to the fact that charges were brought at all in the racist vigilante murder, and that convictions of white men for
murdering a Black man were obtained from an almost entirely white jury.
But the conviction of Ahmaud Arbery’s murderers illuminates an oft-ignored activism led by African-American women. Wanda Cooper-Jones, emerged as a leader to agitate for the rights and dignity of her son, for people of African descent, in an atmosphere where white mob violence is part of the fabric of life and amidst the enactment of yet new Jim Crow laws of exclusion. There stands Wanda Cooper-Jones, sustained by her spirituality, who dared to assert her political agency to confront white supremacy. She set the world on fire and echoes and expands our understanding of the women who vigorously fought to challenge white supremacy, for justice. Wanda Cooper-Jones draws from the diverse political and religious traditions on which Black women draw to craft a response to white supremacy and pushed to craft a political praxis born of necessity as had Black mothers before her.

SAY THEIR NAMES: Mamie Till-Mobley who wanted the world to see “what
they did to my baby” Emmett Till, lynched in 1955 and who turned her grief
into a 40-year crusade for equal rights and justice for Black children;

Lucy McBath, mother of Jordan Davis, murdered by a white vigilante at a gas station, who won the Democratic primary in Georgia’s sixth Congressional District;

Gwen Carr mother of Eric Garner, who has become active in police reform in the United States, including as a member of Mothers of the Movement and a voice in the Black Lives Matter movement;

Sharonne Salaam, mother of Yusef Salaam of the Exonerated Five, who speaks out for those wrongfully incarcerated. While they are by no means the only ones, these Black and Latina women, along with Wanda Cooper-Jones, amidst their unfathomable pain sparked the conscience of a nation and have left an indelible mark on the lives of countless people and they will inspire generations of activists.

Brown sneers at Ms. Cooper-Jones’ embracing the Black prophetic faith
tradition which she expresses enabled her to transcend societal humiliation
and degradation, as she faced down the lynch mob who murdered her son,
recalcitrant law enforcement and a legal system still weighted by the
vestiges of Jim Crow laws. He demeans the rich history at the heart of the
African American experience. Ms. Cooper-Jones way of being religious is
imbued with a burning concern for social justice and the improvement of
flawed social institutions, which harkens back to enslavement, traveling
through Emancipation, Jim Crow, the Great Migration, the Civil Rights movement, and in the present-day. Black worship has been wrought out of
the experience of slavery, lynching, ghettos, and police brutality, and created to combat a system designed to crush the spirit, and at all points subversive of the larger culture of enslavement that sought to destroy their humanity.

There are additional dimensions to Brown’s insulting, gratuitous and clueless commentary that are demonstrably white supremacist, with an emphasis on the supremacist’s sense of superiority. He is oblivious to what fosters human solidarity and respect for an oppressed people’s self-determination, a phenomenon that has for too long plagued so-called progressives.

Brown’s almost incomprehensible comment — is it meant to be a critique of
faith or religiosity? – both bespeaks his ignorance of the role of faith-based
perspectives in the history of Black resistance, and the specific purpose for
an attack on “Black pastors” and their presence in the courtroom by an
attorney for the murderers. Brown’s callous declaration that the words of a
grieving mother show her to be “foolish” exposes his total lack of empathy
for or solidarity with Black and other people of color who “suffer the most
cruel and abject horrors.”

Instead of attacking or mocking a grieving Black woman for the “foolishness” of her faith, Brown could have applied his wealth or supposed
communication skills to trying to undermine the system of white supremacist impunity that makes Arbery’s murderers presume they will get away with lynching. Brown could have committed his resources to challenging the efficacy of the “Batson Rule,” which has come under serious criticism as a toothless and inadequate decision that fails to reduce the unfair exclusion of jurors of color, and which caused the Georgia Judge to declare that there was an appearance of “intentional discrimination” at play from the inception of the trial.

Instead of opportunistically using a racist tragedy and its aftermath to demonstrate how intellectually clever and superior Brown imagined himself to be, he could have used his access to a massive number of “progressives” obtained through his profitable direct mail and media work to educate, agitate and organize for conscious solidarity by white people with Black, Indigenous and People of Color in struggle against vigilante violence, state violence, repression, oppression and exploitation. He could have promoted a crowd-funding campaign to counter the racist, right-wing fundraising to support racist vigilantism, such as that of Kyle Rittenhouse and his formidable base of supporters.

But apparently none of these constructive possibilities occurred to Steve
Brown. The question this poses to all of us is whether we can break with the
grip of white supremacy on our own consciousness and practice, and
demand that he be held to account for his arrogance and cruelty. There is a
direct line between Brown’s male chauvinism and contempt of a grieving
Black mother as “foolish,” and the media stigmatization of the Black victims
of police or vigilante violence, or the dismissal of women’s charges of
harassment or sexual violence within the workplace or the movement as
baseless over-reactions. It is long past time that we hold ourselves, and
“progressive” media moguls or movement stars, to a higher standard of
solidarity and accountability.

We who believe in freedom honor the Herculean efforts of Wanda Cooper-
Jones, perhaps channeling, but certainly echoing the spirit of anti-lynching
shero Ida B. Wells to push relentlessly for the arrest, prosecution and
conviction of the lynch mob. And we learn from those who call!

This is the context in which we find that Brown’s comments, in their awful
arrogance and cruelty, are a distinct manifestation of white supremacy and
that his need to disseminate his racist ideas is a necessary part of the
ideological superstructure he upholds. A methodical exposure of Brown’s
racism is vital and necessary to promote equal rights and justice. Black
people across the country are calling on all of us to acknowledge the harm
felt by their communities. Saying nothing builds on those acts of violence
and by being silent we become complicit in harm and continue to privilege
the voices of the privileged.

He that boasts of his own knowledge proclaims his ignorance. –
African Proverb