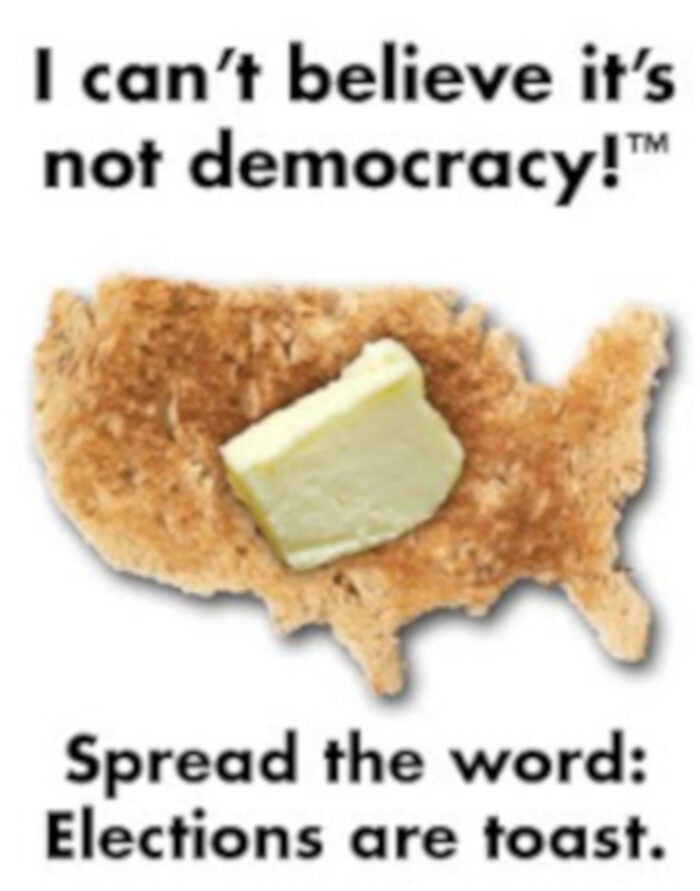 New Day Pacifica claims their Bylaws revision is democratic, or even more democratic, because members vote for positions on the Pacifica National Board directly. But read the fine print!

The New Day proposal is carefully crafted to allow a simple majority of voters — possibly from a single station — to control almost every single important office, and thereby the entire National Board and apparatus of Pacifica.

Each seat on the new national board, as well as each seat on the new disempowered local station boards, is elected separately and simultaneously, in such a way that the same faction from the same station can dominate every single one. The same group of voters can win the chair, vice-chair, secretary, and treasurer positions on the new national board, and they can all come from a single station and share the same point of view. This is how NDP claims it will “eliminate factionalism”: by monopolizing all power and authority in the hands of their faction, and excluding everyone else from representation.

Ending “factionalism” by giving one faction all the power

This is reinforced in a couple of ways:

Compare that to the current system, where members vote to fill multiple equally empowered delegates at the same time, guaranteeing that no single faction or nationality or station can “sweep” all the seats, and requiring that the diverse viewpoints and constituencies that make up Pacifica are reflected within the governance. Having a “Single Transferable Vote” to fill multiple seats at the same time guarantees a much higher degree of representation, and greater diversity in viewpoints, gender, nationality and racial or other identities. Both the current Pacifica National Board and the Pacifica Fightback formation represent this capacity to unite different points of view and different stations with a common purpose of defending free speech, diversity, community radio, and democratic discourse.

Even worse than the situation that would eventually prevail locally or nationally, if the New Day proposal is adopted, is their plan for a so-called “transitional board” for three years without even such a carefully controlled and pre-ordained general national election.

Instead, adoption of the Bylaws revision would “appoint” a new national leadership. No opposition, no other candidates, no discussion of what they would concretely do if they become officers, because they have been named with no consultation or discussion with anyone outside the same small group that crafted this plan. The “electorate” was given no say or choice in the naming of these officers, no opportunity to question them or hear them debate opposing candicates — because there are no opposing candidates. One of them, who would otherwise be termed out after six full years, and be required under the existing Bylaws to step aside for at least a year before running again, will be appointed to a new three year term as one of four dominant national officers.This is the kind of “democracy” that would warm the hearts of autocrats everywhere.

What happens locally at your station?

In addition to eliminating all the powers and authority of the local boards to evaluate applicants for General Manager and Program Director, as well as to evaluate the GM and PD’s performance annually, or review the budget and finances, the New Day Bylaws revision imposes the same “winner-take-all”, rule-or-ruin approach on the diminished LSB.

The new local board is composed mainly of officers (and staff cannot serve as officers), and all five officers, one for each position, are elected simultaneously, so that at a particular station the same factional majority can elect all five officers and dominate the remainder of the LSB. Again, they can augment their control or domination by appointing as many as six additional members to reinforce their majority.

One factional majority can win all five officer positions at any given station; paid and unpaid workers are divided from each other by the establishment of a new third class of membership for volunteer producers and programmers and others who make the station run. The numerically much fewer paid staff members have disproportionately more representation than the more numerous unpaid staff members.

In addition, again at the local level, the drafters of this plan seem so fearful of diverging viewpoints, that the dominant group can then appoint as many as six additional members to the local baord to reinforce their majority.

In both the national and the local additions to the boards of people not elected by the members, each voter on the board gets as many votes as there are seats, again ensuring that the same single dominant faction will win all the “elections.”

There may be a need for adjustments and amendments in the current Bylaws, best determined by the existing process that requires majority support from at least three stations. One might be a Bylaw prohibition on “money in (Pacifica) politics,” by conducting the election exclusively over the stations’ airwaves, websites, and communications with members. But there is no need for a wholesale transformation to a top down system, being propagandized for by folks with deep pockets and a burning desire to rule or ruin Pacifica.