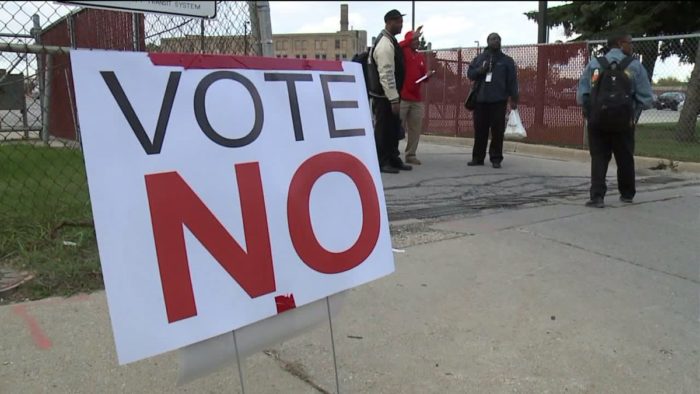 Beginning June 7, listener members and staff members will  vote on a proposed Bylaws replacement that would create a new national board, strip the local station boards of their oversight powers in relation to station management, budget and programming, and create a new third class of membership, permanently dividing the more numerous unpaid volunteer staff, programmers and producers from the paid staff, with less representation.

We are a coalition of listeners and staff from your station and around the network, urging you to vote NO on these anti-democratic, top-down Bylaws changes. Here are the reasons why:

Proponents blame supposedly dysfunctional local station boards and the Pacifica National Board (PNB) for financial problems. But the PNB successfully got Pacifica out of a default judgment and $5.7 million dollar obligation to the Empire State Realty Trust, and recently got an extension on a $3+ million dollar loan that made that possible and avoided a costly and possibly fatal bankruptcy. The  interim Executive Director the board appointed, working pro bono, has cleared up costly financial problems and errors at KPFA that nearly resulted in the tax lien auction of the station’s transmitter and building. She also successfully obtained PPP and EIDL pandemic stimulus loans for Pacifica, and has worked with the National Finance Committee on dealing with KPFK’s budget shortfalls by reducing expenses. Don’t be swayed by New Day’s fear-mongering — vote NO.

The bait-and-switch Bylaws change proponents offer no solution for financial problems, other than the promise that if they can change the Bylaws and take over, they will obtain emergency funding from unnamed major donors. No explanation about why they are not raising those donations for your station and Pacifica right now, or what strings would be attached to that money later. Whereas the PNB and iED have been working on long-term strategic planning for additional sources of revenue, frugal and effective use of the resources that we have, and have pushed for financial transparency and timely financial reporting at the stations, so we can complete all audited financials by June, and put the  stations and Foundation back on track to apply for grants and donations. Don’t be misled by “fake news” and fear-mongering — vote NO!

The replacement “New Day” bylaws, though backed by many paid staff, actually disenfranchise both the paid and unpaid staff, dividing them up, reducing their representation, and then pooling all the paid staff from all 5 stations into a single group to elect one Board rep; the same with all the unpaid staff from all 5 stations, lumped together to vote for a single seat — so that the staff at three or four of the stations will have no representation on the PNB. Don’t divide or disenfranchise the staff — vote NO!

The “New Day” Bylaws reduce the representation and diversity on the local station boards, and strip them of all powers to oversee or evaluate station management, to advise on and review in practice the station’s budgetary plans and financial picture, or to provide a venue for appeal of arbitrary programming changes or decisions. The new Local Station Board would be one in name only, unable also to send delegates to serve on national committees, and would become “a committee of the station” instead, answerable to the top-down management. Defend local oversight — vote NO!

The New Day proposals are predicated on a managerial elitism under the phony claim of “professionalism.” But it was their “professionals” who illegally shut down and took over WBAI in NY in the midst of a fund drive. They unsuccessfully tried to swap “Pacifica Across America,” syndicated shows from the west coast for the locally produced news, public affairs and cultural coverage in NY. It has been their “professionals” who have steadily lost listeners and financial support at KPFK by abandoning community oriented programming, ending the local news, and requiring the station to spend half the year in fund drives to try to meet its bloated payroll.

Centralization of power will lead to gentrification of the airwaves, marginalizing the voices from communities in struggle that are shaping the future and developing solutions to inequality and injustice! Don’t buy the hype — it’s more democracy, stronger ties to the communities we serve, and developing multi-media and social media platforms that will save Pacifica, not “white-knight” progressive investors or management appropriate to commercial radio or commercially-underwritten “public” radio. Defend community radio — vote NO!

Democracy at Pacifica is a Racial Justice Issue!

The New Day bylaws propose a sham form of democracy. Even as public jurisdictions around the country are moving towards choice voting and other proportional representation elections, New Day is proposing to switch the method and nature of elections so that the same factional majority from a single station could dominate the entire governance structure. This is because they would set up all the elections to the PNB and local boards as a vote on single seats for a group of named officers, so that a single slate bloc vote could sweep them all and then appoint additional members to reinforce their majority. They would appoint four new national officers as part of the passage of their bylaws proposal, without allowing any alternate candidates. Where on earth could an unopposed selection of leaders who will have unregulated power to control all the assets and management be called “democratic”? Defend democracy and diversity — vote NO!

The proponents and supporters of New Day include people who backed or even took part in the shut down and takeover of WBAI in October 2019; who supported putting Pacifica into bankruptcy, or performing “triage” on stations, or even went to court to have Pacifica’s assets turned over to a private receiver. That’s why New Day’s claim that they support all the stations comes across as falsehoods, and people fear their secret plan is to raise money to cover shortfalls at the CA stations, by arranging signal swaps or even the outright sale of valuable licenses. They have disenfranchised the east coast stations that have the largest Black audience. They have talked openly of turning other stations into “repeaters” for KPFA. Keep Pacifica strong and whole — vote NO!

Please email us at pacificafightback@gmail.com and let us know your thinking and concerns or your ideas for new or improved programming. You can sign up for our low volume email list, pacificafightback@lists.riseup.net. And please  help pay for the cost of a post card mailer to members for whom Pacifica doesn’t have an email address,  by donating to RescuePacifica.net

New Day has deep pockets, slick propaganda, and is trying to buy this election on a “rule or ruin” basis. A positive, specific Bylaws amendment we might consider is “Money Out of Pacifica politics” — deny permission to pay for mailers, e-blasts and other costly propaganda, and require the election information to be broadcast, web-posted, and emailed to all subscribers and staff, informing members in depth about what’s at stake.

One thought on “Vote NO! to Protect Diversity, Democracy & Accountability”